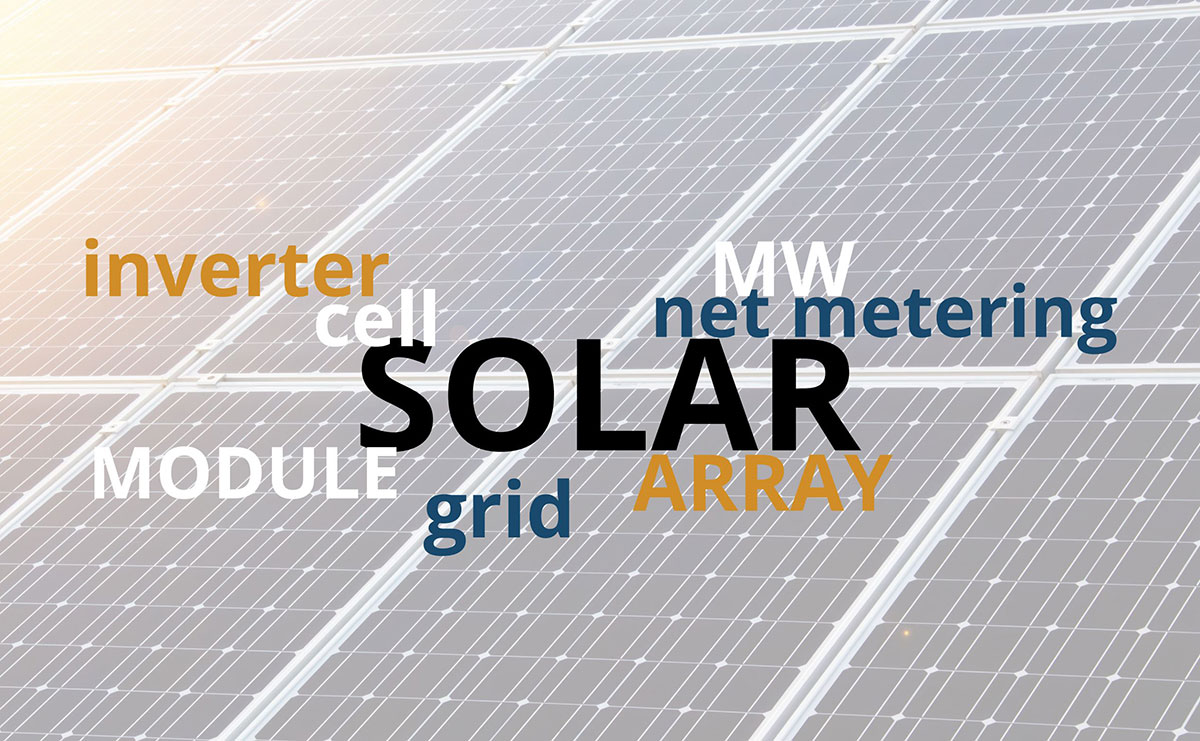 Just starting to learn about solar? Knowing a few of the commonly-used terms and acronyms can help you on your way to better understanding the technology and key concepts associated with solar:

Inverter: A device that converts direct current (DC) electricity produced from solar panels to alternating current (AC) that can be used to power households and businesses.

ITC: A common acronym for the federal government’s Investment Tax Credit, an incentive which allows companies to deduct up to 30% of the total solar PV system cost from their tax obligation. The ITC is an attractive vehicle to reduce tax liabilities and make a long-term capital investment providing decades of clean energy.

Kilowatt (kW): A standard unit of electrical power equal to 1,000 watts. This term describes A kilowatt is a unit measuring the production capacity of to describe a small to mid-sized solar PV system.

Kilowatt-hour (kWh): A kWh is a unit of electrical energy consumption, equivalent to 1,000 watts over a period of 1 hour.

Levelized Cost of Energy (LCOE): The cost of energy produced by a solar system measured in cents per kWh. The LCOE is calculated based on the system's installed price, its total lifetime cost, and its lifetime electricity production. It is a simple effective rate that can be directly compared to the utility rate. Utility rates typically rise over time, while the LCOE is locked in for the life of the system.

Module: A solar panel. The terms “solar panel” and “solar module” are interchangeable.

Net Metering: Net metering is a policy provided by a utility company that allows the solar system owner to send excess electricity back to the grid. When this occurs, the facility’s electric meter actually spins backward. The utility company then bills the customer only for its net usage (kWh used minus kWh generated/sent back to the grid). While most utilities will not refund cash if there is excess generation, many will carry forward a credit toward the next month's bill.

Orientation: Placement of the solar panels with respect to the cardinal directions N, S, E, W. Azimuth is the measure of orientation from north.

Peak Demand/Load: The maximum energy demand or load during a specified time period.

Photovoltaic (PV) array: An interconnected system of PV modules (panels) that function as a single electricity-producing unit. The modules are assembled and wired together in arrays with mounting or racking structures.