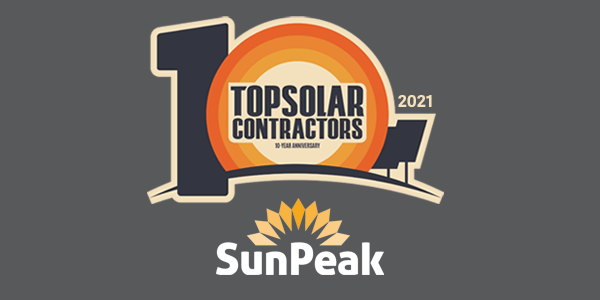 The Top Solar Contractors list is developed each year to honor the leading 400 solar firms in the utility, commercial and residential markets across the nation. Honorees are ranked by number of kilowatts installed in the previous year. SunPeak, founded in 2014, experienced triple-digit growth in installations last year, despite the pandemic. The company received an overall rank of 119 across all market segments while also earning a spot within the top 50 providers nationwide for commercial and EPC (Engineering Procurement and Construction) work.

According to Solar Energy Industries Association (SEIA), the national trade association for the U.S. solar industry, there are currently more than 10,000 solar businesses in the United States.

“It is very meaningful that we’ve been able to achieve this level of success,” said Chad Sorenson, President of SunPeak. “We’ve stayed focused on delivering very high-quality, cost-effective systems, and in the meantime the industry has reached a point where the favorable economics of solar can make the sustainability benefits possible for more and more companies. It’s an exciting time for SunPeak and for the solar industry at large.”

The U.S. solar industry grew 43% in 2020, with contractors installing more solar panels on homes, businesses and across the country than any other year on record. Last year SunPeak installed more than 13.5 megawatts of roof and ground-mounted solar in eight states including California, Connecticut, Illinois, Indiana, Minnesota, Ohio, Pennsylvania, and Wisconsin.

At the end of 2020, the federal government passed a two-year extension on the solar investment tax credit (ITC), which is expected to further accelerate solar adoption across all market segments. SEIA industry statistics, compiled by research firm Wood Mackenzie, indicate the U.S. solar market will quadruple by 2030.