SunPeak solar PV system at Culligan Total Water Treatment Systems, Inc in Baraboo, WISince being founded in 1936, Culligan Total Water has lead the way in water technology – their decision to turn a forefront mindset to solar technology will allow the Baraboo dealership to offset ~66% of their current electrical consumption with the sun’s energy. "Our solar array is a logical next step as we evolve to a future with more efficient systems and service vehicles,” said Skip Heffernan, Owner and Operator of Total Water Baraboo.

“Recent reductions in solar installations costs allow companies with large electrical loads to embrace solar as an economical energy source and long-term investment. SunPeak is proud to partner with Culligan Total Water of Baraboo to help offset their dealership’s energy needs with clean energy from the sun as a champion for sustainability in Wisconsin,” said Chad Sorenson, President of SunPeak. 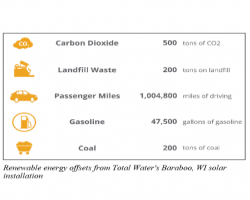 On both a national and global level, Culligan Total Water Treatment Systems, Inc. demonstrates this commitment through participation in programs such as disaster relief and partnerships to provide clean water to those in need. Culligan was also first to develop synthetic softening resin, and developed and exclusively sells the world's most efficient water softener which reduces salt and water use by 46%.

SunPeak is a turnkey developer of commercial solar systems, handling feasibility studies, financial payback analysis, system engineering, installation, and ongoing maintenance. Projects typically range from 100 kW to 5 MW and offer significant cost savings relative to conventional utility rates. The company was founded in 2014 by Chad Sorenson and a team of leading global solar developers who have completed more than 450 MW of installations on three continents over the past decade, including projects in Canada, Germany and Japan. More information at www.sunpeakpower.com or 608-535-4554.