Are There Fire Risks Associated with Rooftop Solar? 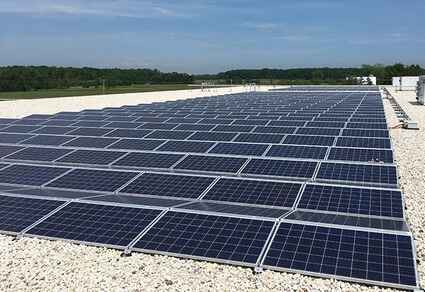 Occasionally, customers express concerns regarding rooftop solar installations and their potential to cause a fire. While early solar systems did come with higher risks, a properly engineered and installed modern rooftop solar system adds very little additional risk to building or personnel safety. This is due to significant improvements in component technology, system integration and more stringent electrical code requirements.

To help you better understand why fire risk has lessened so drastically, we’ve compiled a list of common concerns and how those concerns have been addressed:

In the event of an emergency, are first responders able to completely shut down system power to safely navigate my building? Isn’t it true that the array’s DC conductors have the potential to expose a first responder to dangerous voltages because the solar panels will produce power any time there is sun?

This issue has been addressed by code changes in the last two revisions of the National Electric Code (NEC):

Is there an increased risk of a fire starting on the roof due to a malfunction of the electrical system?

In reality, any electrical device or equipment has some level of fire risk. However, the design of modern inverters, specifically the inverters used by SunPeak, include many levels of protection to minimize this risk. This includes ground fault, overload, over-temperature, and arc fault protection. These protective elements make the system safer than most other electrical equipment on rooftops or inside buildings, such as HVAC electrical equipment or general building devices.

SunPeak’s design also mitigates this risk by avoiding unnecessary electronics, such as combiner boxes.
SunPeak’s commissioning process includes detailed testing of the system and its components prior to substantial completion of the project. The testing is designed to detect electrical issues present, such as poor connections or damaged wires.


Does the small gap between the solar module and the roof increase the risk of fire due to radiant heat transfer from the module?

While this may seem possible, the opposite is actually true. Solar panels absorb energy that would otherwise be directed to the roof to make their power. The standard SunPeak system is also designed with a thirteen-degree tilt that allows air to easily flow between the module and the roof to help cool that space. One study from the University of California–San Diego confirmed this on a commercial rooftop by measuring a five-degree cooler temperature under the modules than the rest of the roof.

In order to limit the spread of fire, does the system need be tested for fire exposure in case ignition occurs?

SunPeak works with the most reputable solar equipment manufacturers and uses the highest quality components available. Each have been thoroughly tested together to ensure a safe and reliable system.

SunPeak has achieved approval for its electrical and fire prevention measures on projects involving FM Global. FM Global is an industry-leading commercial/industrial insurance company. Their required list of design and safety expectations exceed industry standards and required code for fire and electrical protections, as well as many structural stressors such as wind, snow, and seismic loading.

Is disconnecting electrical power from the arrays complicated? Can the arrays generate electricity after they are disconnected?

For every PV system that is interconnected with the utility power, there is a single point at which the system can be disconnected. Typically, this is one disconnect switch near the utility transformer or service entrance. NEC-required labeling is provided to adequately warn and advise anyone working on the building’s electrical equipment that there is a PV system interconnected and how to disconnect it. Modern utility interactive inverters shut down as soon as utility power is lost (i.e. the disconnect is opened). The arrays will not produce power again until utility power is restored.

SunPeak’s commissioning process includes operation and maintenance manuals and owner training. These documents and training give clear direction on the operation of the system and all necessary safety features.

The utility company also reviews the interconnection concept prior to the installation and is able to shut down the system.

SunPeak works with organizations nationwide, providing them with high-quality, safe, and reliable solar PV systems. Our skilled team takes an educational approach with customers, and welcomes questions regarding commercial solar design, installation, maintenance, and financing. Please contact us directly with your questions, and also be sure to visit SunPeak’s blog where we post new educational content frequently.